The Nintendo DS has its own special recipe for gameplay, but the system still needs its share of bread-and-butter games to fill it out. Games like Kirby Canvas Curse and Viewtiful Joe DT are fun and all, but a system needs its share of racers and beat-em-ups and sports games to keep the wide variety of folks happy. Yep, even licensed franchises have a place on the DS. 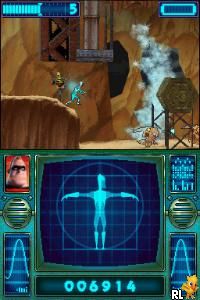 Of course, to be welcome on this system, the same as any system, the game's got to be good. And when it comes to licensed franchises, that doesn't happen much. The DS hasn't seen a whole lot of bad licensed games, but the system is seeing its fair share now that it's rolling through its first full Christmas holiday season after last year's late-season launch. THQ's follow-up to its game based on Disney's The Incredibles movie has come to the Nintendo DS, and despite following the console game's multi-character and multiplayer construct, it doesn't have enough to avoid the trend towards junky licensed games.

For the Nintendo DS edition of The Incredibles: Rise of the Underminer, developer Helixe has come up with sharp 3D visuals (played in a 2D plane, for that '2.5D' effect) to replace the sprites and bitmaps of its previous GBA edition while sticking to the side-scrolled brawling action. It looks nicer, to be sure, but the gameplay is in some ways worse with the move to 3D. The punch-fest play is largely the same as the recently-released GBA edition and thankfully moves faster than the 2D version, but it's missing the juggling air moves that are a lot of fun to play with. Its combat is also often boxed in by the zooming camera -- when the screen stops to let in a flood of enemies, the camera is often so close that there's no room to maneuver your characters.

The 3D engine also often backfires when its technical flaws rub against the gameplay. The game gets jerky when it comes around a corner, and often waits until your character is right near the edge before transitioning the camera angle. You'll often get tagged by baddies that you never saw. Sometimes, you can see them, and there's still nothing you can do. Bullets will follow the '2.5D' path and curve around corners to hit you even when you should be out of the way. We're not sure if it's by design or a technical error, but bullets will also often pass through walls to hit you. The game is just loaded with cheap hits because of these three flaws. There will often times be a barrier that you have to carefully navigate platforms to get up to, with one character so big and clunky that he's hard to control in tight corners, the other so fast and squirrelly that he falls off platforms when you try to get him to face the opposite direction, and it's impossible to not lose life in the process.

One of the most strange things about The Incredibles: Rise of the Underminer is that it's structured as an arcade game. There's a story to play through, but for some odd reason, the hidden collectibles scattered throughout the stage are there just for points. Points? Sure, there's an in-game leaderboad, but who am I going to go bragging to that I have the high score on Rise of the Underminer to? I can't buy any bonuses with my points, and the game's too long to play through many times through just to improve high scores on my personal copy of the game. It just feels so arcane to play with just points and then the game's ending as your reward for progress. And because it's designed for this arcade style, it continues in this wrong direction with limited continues (despite the battery-backed save slots), making the game needlessly difficult and repetitive for those who just want to enjoy a trip through the story. There aren't major boss fights to finish off the stages, so it feels like one long slugfest that you have no clue how long will go on. Should you conserve continues, or are you almost at the Underminer? The only way to know is to play for hours, then fail and play through it again until you've gotten farther. The kids who are into The Incredibles don't necessarily appreciate games this 'old-school', and those of us who recognize this as an attempt to bring back the TMNT-style beat-em-up won't find enough here to get into it just because it can possibly pose a challenge.

The redeeming quality of The Incredibles is its puzzle-based action, which is made more interesting (albeit more frustrating) with support for multiplayer gameplay. Rise of the Underminer throws out almost the entire Incredibles family and team, instead focusing on just Mr. Incredible and buddy Frozone in their underworld adventure. The other Incredibles are dearly missed, but the combo of characters we did get here is a good pairing. Mr. Incredible is the muscle, and he's fun to use for beating up the waves and waves of robot enemies that pop up to attack the team. Frozone, on the other hand, has his special icy skills to make use of, including an ice glider and an iceball for deep-freezing enemies. Single-player goers can tag-team the two Incredibles in attacks, using Frozone to ice up enemies and then turning to Mr. Incredible to huck the frozen foes at other baddies. In multiplayer (which requires two copies of the game, unfortunately), both players must work together to battle enemies and solve puzzles. Since Mr. Incredible is all bulk and not much else, it's mostly up to the player who's Frozone to do the thinking of the game -- Mr. Incredible can ride on the trail of Frozone's ice glide and jump on the ice platforms Frozone makes to get to the high-up computers he needs to smash to open a gate. The game's stage design is usually so bland that you won't remember any of the challenges you've past (it doesn't help that, once you've gone underground, everything looks the same for long spans of levels, and you're always fighting faceless robots), but at least the puzzle design is a step up from normal brainless brawlers. 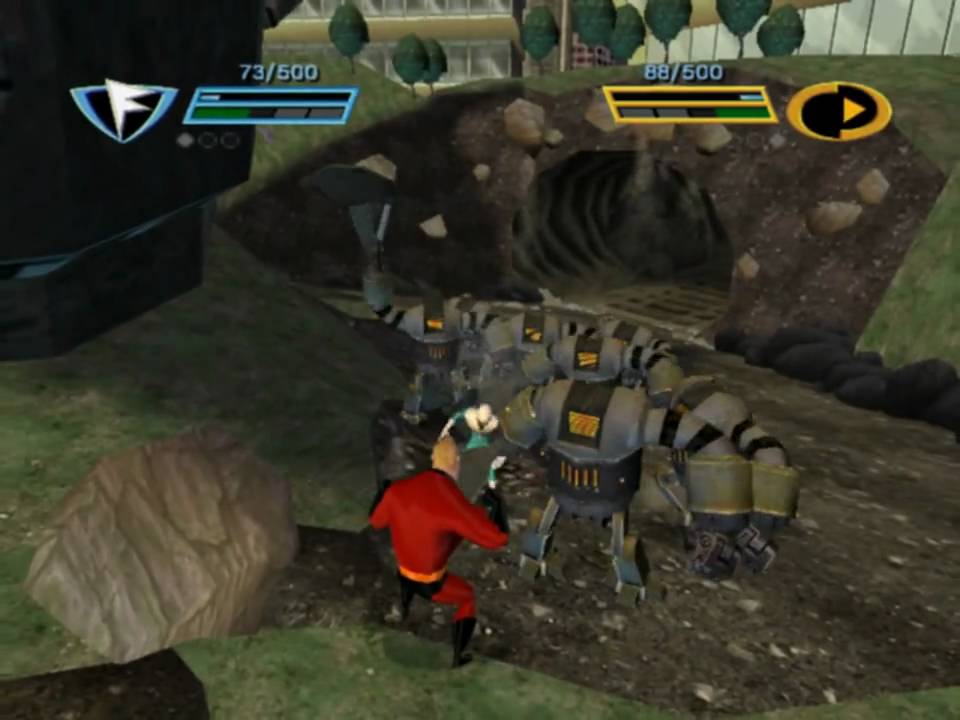 The Incredibles Rise Of The Underminer Movie

One other aspect of the game that should be noted is its implementation of the DS's unique features ... this may be one of the most silly uses of the DS touchscreen we'll ever see on the system. Imagine playing Final Fight with scribbles and taps instead of regular button-mashing, and you get the idea of what's wrong here. I guess it works (don't you dare use the DS thumb strap as it mentions), but it's incredibly inaccurate and undependable (especially for jumping), and it's not like the action is forgiving of you screwing around with a screwy control scheme. Stick to the regular D-Pad and face buttons, even though those controls aren't always great either. Frozone's platform-freezing shots don't always obey your choice of direction, sometimes firing at a 45 degree angle and sometimes firing straight up with the same control input (especially a problem when you're taking those cheap hits from enemies while trying to make that platform), and neither character is too graceful when trying to hop about on platforms. You also sometimes can't break a combo when fighting an enemy, so you'll take a number of hits that you tried to get away from and couldn't because of the control.