After seeing what I was able to do with foam for Amie Lynn’s Lighting armor, my friend and Cosplay model Jessica Nigri , contacted me about helping her with an armored costume. She wanted to dress as Anya Stroud from Gears of War 3, and wanted to show people that she does costumes other than just sexy versions. She had attempted to use foam and bondo in building her armor but did not have the tools, skills or understanding of how to build her costume. She was trying to use pepakura files modified for foam use but it wasn’t going anywhere.

At that time, I was living at home with my parents, taking care of my mother who had contracted cancer, but I still made time to help Jessica reach her goal. The first step was to teach her how to use the materials and tools properly. up until this point, it was a mess, and hard work with little to show for it. I helped her make templates and how to properly fit the armor to her body.

Gears of War – Anthony Carmine This papercraft is the Anthony Carmine, based on the video game series Gears of War, the paper model was created by J. Private Anthony Carmine was the brother of Benjamin Carmine and Clayton Carmine and a Gear soldier in the Coalition of Ordered Governments army. This is the main database for 'Pepakura' files. (.pdo files) 'DO NOT' vandalize or add non-Gears of War files, as this will result in an immediate one-year ban. Ironman mode was introduced in Gears of War 4's Rise of the Horde update. It is a separate toggle option that can be added to any of the five difficulty settings. Ironman mode simply means don't die. In Campaign, one death will reset your game to the beginning.

Because I was busy with family issues, I didn’t have as much hands on as I normally do but I was still able to help Jessica design and fit each part. It was then that I showed her the basic steps needed to seal and paint foam using modge podge, wood glue. I then needed to add the electronics to the chest armor and to do this, I visited my local Pepboys and purchased 2 prewired LED pads. These are some of my favorite tricks to adding lights to a costume without the need of a breat board. The trick was to cut the wires shorter and then solder the leads in a paralled circuit so the lights would be equal brightness rather than in series where the second set would be dimmer. Using a frosted piece of plastic, I placed the lights into the shoulders and took a look at the results.

At this point, my part was done due to my mother becoming more ill, but the positive side was that Jessica and I had gotten her to the point where she could finish the costume on her own. She sewed the fabric parts, used the foam working skills I had taught her, and completed the costume on her own. So I guess you could say this was a collaborative build rather than a commission. Either way, the fans loved her finished costume.

Advertisements
Ever since I made the Lancer (pictured below), I've wanted to make the C.O.G armor to go with it. Material costs, time and lack of a suitable work shop have always prohibited that. That is until the advent of EVA foam mats! Recently many people have been using floor mats as a material for creating armor, and other costumes.
Here is the original Lancer that attaches to my paintball gun (Tippmann A5)

...and here is the final Lancer prop.

Since they're incredibly cheap, easy to obtain, and simple to work with, I decided to take a crack at making my own armor.
After doing some test runs with poster-board, I realized I needed to have a mannequin in order to test the fit and make sure everything was proportional. I created this one by putting on an old t-shirt, and having my wife duct-tape me from belt to neck. Then, she cut down my back so I could get out. I taped up the back again and stuffed the whole thing with some old sheets.

Here's the entire set of tools needed to make the armor. Very easy, very cheap.
Next, I created the neck seal. I planned to build everything off it's scale. After that, I started to lay out the shapes of the chest piece with poster-board. Once finalized, these shapes would be templates for cutting out the EVA foam.
Once the major shapes were laid out, I decided to start cutting them out of the foam. The black foam is 1/2' thick. I used a box cutter and many, many blades.
Some of the templates were changed on the fly. I had to adjust and re-do some of them to be more accurate and to fit together better. After all, I'm no barrel-chested, heroically-proportioned, meat-head of a videogame character.
The idea here was that I would create a base 'undersuit' on top of which I would lay out the actual armor plates. This would allow for the grooves between the plates and more flexibility for fitting and customization.
After I ran the material around the waist, I cut it on both sides and mounted some clasps so that I could get in an out of the armor.

Here's the finished 'undersuit.'
Here, I've started placing the first few pieces of actual armor. In this case, I'm using 3/8' mats.
As before with the undersuit, in order to get the shape right before I start cutting into the mats, I used paper, and poster board to make templates. Once I'm satisfied with a shape by pinning it in place, I cut the shape out of the foam. It's a lot of trial and error, and a lot of taping bits of paper together.

For the front end of the shoulder 'straps' I used some styrene.
These are the templates I used for both the undersuit and many of the armor plates.

Here, I removed the shoulder straps to cut out the slits where the blue lights come from. 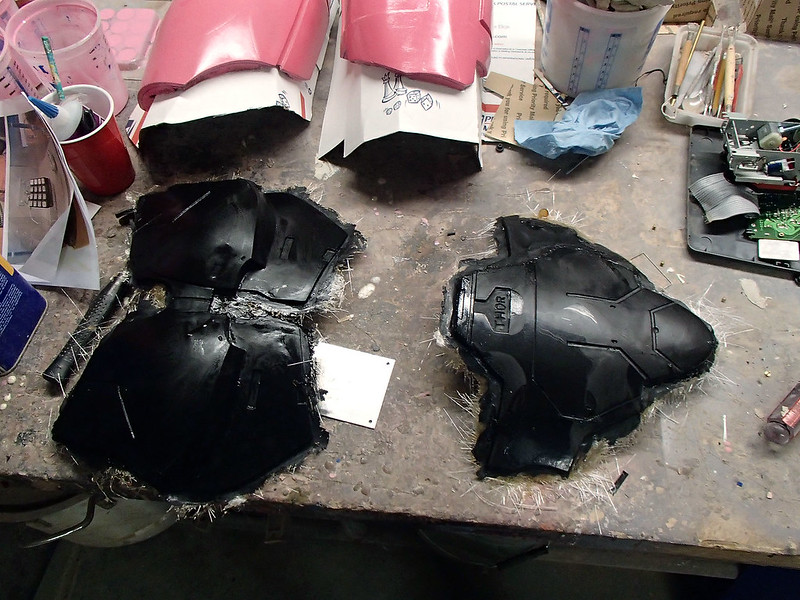 Starting to add some detail to the arm holes.
I attached all the armor plates using some webbing and hot blue. I attached the plates to the undersuit using Velcro strips.
I had the idea that the undersuit could be a base for all future Gears of War armor. I could later, return to this project and make GOW 3 armor right over my existing undersuit.

This is the undersuit with all the Velcro strips
This is the main piece for the back, and two more side pieces. I shaped the back piece by bending it and working it while holding it over the burner on my stove. Then I threw it in the freezer for a few minutes. It works quite well actually.
For the more intricate details on the back, I got some craft foam. It's available at any major craft store. It's 2mm thick and not rigid at all.
Despite the craft foam colors shown above, I actually used mostly black and white sheets so far. 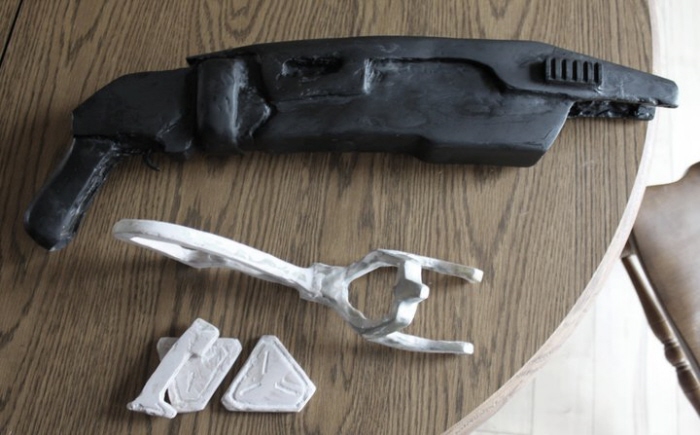 I cut into the existing foam here so that I could sink pieces into the hole to create a slope
You can see now that those pieces are pressed into the holes I cut earlier. I also added the base for that main box thingie in the middle of the back.
I decided to re-do the entire back plate. What you see above is not what I want, so I here's the progress on the new back plate:
This is the beginning of the box thingie on the center of the back.

Here, I started using craft foam to create the finer details of the armor plating.
These straps that come from under the arm and terminate at the bottom of the back were the most re-done pieces so far. It was a difficult transition that required the back plate and the rest of the piece to be perfectly lined up so that gaps would not reveal themselves later. I finally got it though. I also burned the grooves into those pieces.
Here I've started to create the template for what I call the 'fanny pack' near the top of the back
It was a tough shape to get down, but eventually it came together. Unfortunately I'm out of the thin craft foam so I can't finish it right now. I used 1/4' craft foam sheets to create this shape.
Since I'm out any large pieces of the 2mm, craft foam, I moved on to the front buckle and belt assembly.

The belt. It is every bit as tedious as it looks. And I'm out of the brown foam so we stop here for now.
To shape the shoulder pads, I used the stove top to heat shape them, then I pushed them into this bowl. Still in the bowl, I put them in the freezer for a few minutes.
Once again, I'm re-doing the entire back plate. Hopefully for the last time!
I'm also re-doing the 'fanny pack.' This time, I carefully glued together little strips of foam to form the shape. To give it rigidity, I poured some urethane resin and slushed it around.
At this point, I was not happy with the overall shape of the chest piece. I decided to scrap the black 'under armor' and re-do a lot of the major pieces.
I mounted these buckles onto the top of the shoulder plate to attach them to the rest of the chest piece.
This allowed me to detach the back plate in order to get this thing on me.
Starting to draw out all the panel lines and rivets.

It was at this point in the project where I stopped taking pictures. I was running out of time. The only major thing that's missing the boot construction. It was pretty tough to get the right shape, but they ended up turning out great. I also made the thigh plates, cod piece, and the wrist thingies. The elbow pads where just slightly modified, small knee pads from Home Depot.
I also never really got a chance to take any proper final pictures. This is what I have though:
After Halloween (2011), I went back and added the rest of the decals. Thin blue circles on the chest speakers, blue stripes on the thigh plates, and those really cool bird insignia on the shoulders. I also added lights to the shoulders.
In the end, I think it turned out fantastic. Now, maybe one day, I'll take some real pictures.